Theatre / The Importance of Being Earnest 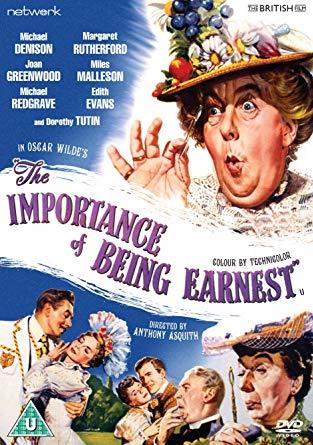 "The truth is rarely pure and never simple. Modern life would be quite tedious if it were either, and modern literature a complete impossibility."
— Algernon Moncrieff
Advertisement:

The Importance of Being Earnest, A Trivial Comedy for Serious People is an 1895 play by Irish playwright Oscar Wilde. It is a farce on the societal conventions and restrictions of late-Victorian society, and remains enormously popular today.

The play follows the lives of two best friends, Jack Worthing and Algernon Moncrieff. Jack lives in the country with his ward, Cecily Cardew, but spends much of his time in London — where he calls himself "Ernest Worthing," so that he can do as he likes without anything getting traced back to his real identity. Furthermore, as luck would have it, his girlfriend Gwendolen (Algernon's cousin) has always dreamed of marrying a man named "Ernest." Algernon finds out Jack's ruse, but keeps Jack's secret for his own mischievous purposes: since he knows that there is no such person as "Ernest Worthing," he can sneak off to Jack's country home and pose as "Ernest Worthing," where he meets and falls in love with Cecily.

Jack, meanwhile, had "killed" his fictional brother Ernest, only to find that Cecily had already met "Ernest" in the form of Algernon. Not long after, Gwendolen arrives and meets Cecily, and the ladies soon find that both of them are engaged to a man named Ernest Worthing.

It makes... more sense if you actually read it. And keep in mind that Wilde specifically ordered that the comedic script should be acted with the utmost seriousness. Plus the finale ending with the multiple plays on the word/name "Ernest" is much funnier if played seriously.

Is not, in fact, one of the Ernest movies.

Alternative Title(s): The Importance Of Being Earnest