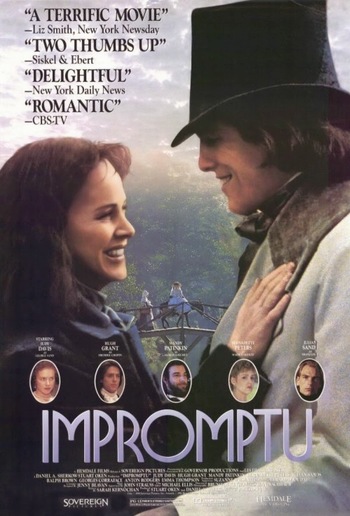 "You won't get him with a dress; on the contrary, my dear. I know the man. He is not a man; he is a woman. He is all emotion and refinement. He has very few defenses. You must win him as a man wins a woman; if anyone can do it, you can, George."
— Marie D'Agoult
Advertisement:

Since getting divorced, Aurora Dupin, the successful writer of sensational romance novels now living under the pseudonym George Sand, in Paris, has been dressing like a man. In her romantic pursuit of the sensitive Chopin, whose music she fell in love with before seeing him in person, George/Aurora is advised that she must act like a man pursuing a woman. She is also advised to avoid damaging his health by not pursuing him at all.

Sand meets Chopin in the French countryside at the house of the Duchess d'Antan, an aspiring socialite who invites artists from Paris in order to feel cosmopolitan. Sand invites herself, not knowing that several of her former lovers are also going to arrive.

Sand wins over Chopin. Chopin is eventually challenged to a duel against another of Sand's ex-lovers. He faints during the face-off. Sand finishes the duel by shooting the other duelist in the arm and nurses Chopin back to health in the countryside.

At the end of the movie Sand and Chopin leave for Majorca, relieved to escape the competitive nature of artistic alliances and jealousies in Paris.