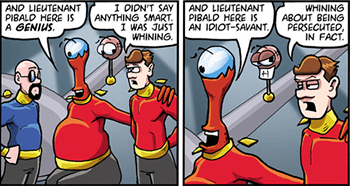 Mr Popo: This carpet gets 10,000 miles to the soul.
Bulma: What?
Mr Popo: The gallon.
— Dragon Ball Z Abridged
Advertisement:

Comedy trope: Alice says something. Then Bob says something or something happens that makes it clear that what she just said doesn't make sense. Alice quickly revises her statement and repeats it. On Second Thought is a more specific case of this, as are some forms of Inflationary Dialogue.

Alternatively, Alice attempts a compliment or insult. However, Bob responds with information contradicting what they thought, which could include Compliment Backfire or Insult Backfire. So, Alice tries again with a new insult or compliment, directly opposed to what they had just said. Could be compounded by a Hair-Trigger Temper.

Students of rhetoric may describe this as "epanorthosis". If Alice has to retract a practical idea that uses bad methods, it's a case of ...And That Would Be Wrong. If she has to retract a controversial opinion, it's a case of Not That There's Anything Wrong with That or Present Company Excluded. If she's retracting an opinion based on who else does or doesn't agree with it, it just might be a Favouritism Flip-Flop. If she's retracting an insult to someone she hadn't meant to insult, it's because of Insult Friendly Fire.

Compare Freudian Slip (where the character says something that reveals thoughts he's concealing or repressing) and Last-Second Word Swap (where the character revises what he was just about to say before he actually says it). Also see Verbal Backpedaling where an improper statement is covered up with a flimsy explanation.

Tasha almost gives herself away.

Tasha almost gives herself away.