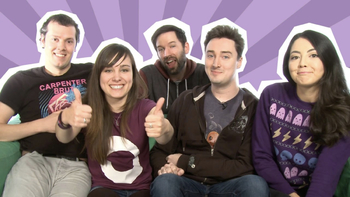 From left to right: Mike, Ellen, Andy, Luke and Jane.
Outside Xbox is a website

hosted by Mike Channell, Jane Douglas, and Andy Farrant with video editing by James Hills and produced by Jon Garnham. The hosts cover primarily Xbox 360 and Xbox One games and create list features, a weekly show called "Show of the Week," and Let's Play videos, as well as occasional videos on game previews, snippets of gameplay, tips, guides, and achievements.
Advertisement:

It has two spinoff channels, one named Outside Xtra

, which allows the cast to discuss gaming topics that aren't necessarily relevant to Xbox games, and is presented by Ellen Rose and Luke Westaway. The second OxShorts

is a channel where the crew upload Behind-the-scenes shenanigans (such as delving into their backrooms and showing off what they find), released in one-minute-long videos to accommodate for Youtube Shorts.

In 2017, as part of the celebrations for Outside Xbox achieving two million subscribers, the two channels joined together to play a Dungeons and Dragons campaign, as frequently requested by subscribers, with then-Eurogamer contributor Johnny Chiodini acting as the Dungeon Master. This proved very popular with the viewers and has become something of an infrequent recurring feature. Each of the campaigns revolve around the misadventures of a party of adventurers known as the "Oxventurers", who are usually searching for nothing more than a nice little holiday but instead end up becoming embroiled in a series of quests resulting in curses, treasure and a terrifyingly high amount of bloodshed. The "Oxventurers" are:

The Oxventurers released a charity single in the Christmas season of 2019, with proceeds going to the mental health charity Mind. You can watch the video here

, and donate to the cause here, if you're so inclined.

The Oxventure takes place in the Kingdom of G'eth, much like the Eurogamer campaign The Break Quest Club, leading to speculation of a shared universe.

In 2021, the Oxventure expanded into Oxventure Presents Blades in the Dark, with Luke in the GM seat and the other five as players. The campaign is set in G'eth, but a few centuries in the future and with a Darker and Edgier feel (though still plenty of humour).

Tropes specific to the campaigns are found at the bottom of the page.

See also PlayStation Access, a similar show, also UK based, but focusing on the PlayStation line. (Outside Xbox was initially founded by Xbox as a rival to Playstation Access, but Outside Xbox split away from Xbox and got bought by Eurogamer, and the two channels no longer operate as direct competitors, getting along rather well.)

Tropes used and discussed in Outside Xbox/ Xtra List videos:

Outside Xbox and Outside Xtra videos contain examples of:

Then he remembers the slang meaning of "junk."

The Tabletop campaigns contain examples of: 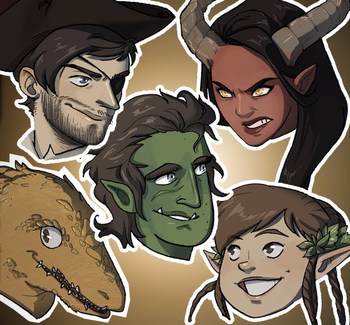 .
Blades
So, lunch?
Yeah sure, I'll be right behind you...just gotta finish... reading the article...
...you're still reading the page Andy...
...mhm...you know, go on ahead without me Jane...I could be here a while.
Feedback

When Barnaby starts boasting in a public restaurant about their latest heist, his teammates start rubbing their foreheads in frustration.

When Barnaby starts boasting in a public restaurant about their latest heist, his teammates start rubbing their foreheads in frustration.