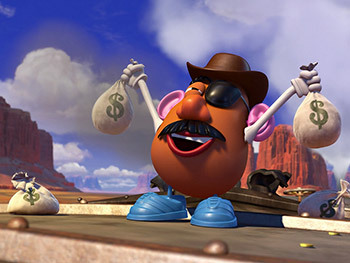 Money in fiction, be it coins or paper is often stored inside sacks. These often have a dollar sign on them, regardless of the location the events take place (although the origin of a dollar sign predates the US dollar). The money bag is a very easy way to indicate wealth to a place or a person compared to, say, jewelry or fancy noble clothing. The small money bag is common enough before the time of paper money to be carried by commoners and nobles alike.

Of course, after the invention and popularity of paper money and consequently the invention of the wallet, the money bag became somewhat of a Dead Horse Trope in real life, although armored car services still use carbon fiber sacks for holding smaller denomination bills and rolled coins for delivery to businesses that need change for their cash registers. Supermarkets and megastores with multiple cashier lanes routinely stock and empty their tills in these pliant, lockable sacks that more closely resemble square pockets than teardrop bindles.

Stock Money Bags add to the cartoony feel of the fiction and hence show up a lot in Western Animation. They are also seen in many Bank Robbery plots. Video games, especially platform games, have them as well although, in a lot of those games, they only serve as a means to gain extra points.

Compare Thief Bag, a piece of standard equipment for burglars to stash their loot in.