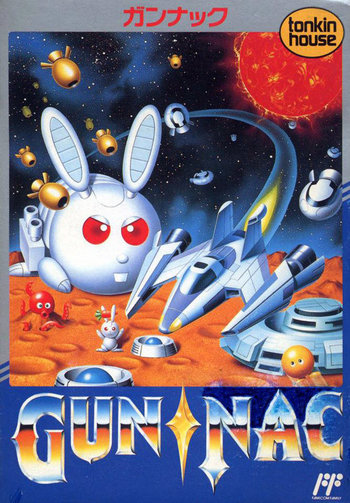 Do you know of any other game that has you going up against a giant mechanical bunny?
Advertisement:

GunNac is a Shoot 'Em Up by Compile released for the NES in 1991.

The game's plot tells the story of a far-off artificial solar system named IOTA Synthetica, which is being colonized by the people of Earth due to depleted resources. The real trouble begins when a wave of cosmic energy causes animals and even inanimate objects to come alive and start attacking the people. All is not lost, for the Space Federation has enlisted the help of Gun Nac! Gun Nac's mission is to search to system's 7 planets for signs of hostile forces, perhaps even an invader...

While GunNac is fairly obscure, it is rather popular for its smooth gameplay, detailed graphics, and quirky setting. It also has an unusually high degree of customization.