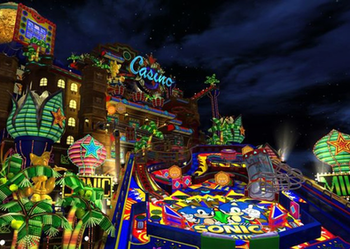 Come on, why don't we spin the wheel? See whom it may call?

Casinos. A place of gambling and neon lights. But it turns out that they also make good Video Game Settings.

These tend to be wacky. And big. A level filled with giant poker chips, playing cards, roulettes and the like. Most likely as platforms, or hazards. Slot machines usually have an effect on gameplay. Most commonly found in platformers. Seems to be present regardless of the Target Demographic's age.

It's not uncommon for these levels to be the setting's fictional equivalent of Las Vegas.

A Sub-Trope of Wackyland and Casino Episode. May overlap with Pinball Zone, Minigame Zone, or Amusement Park. May also be related to The Casino. Commonly a sub-area of a Metropolis Level.

Casino Night Zone is a level from the second Sonic game set in what is essentially one giant slot/pinball machine.

Casino Night Zone is a level from the second Sonic game set in what is essentially one giant slot/pinball machine.