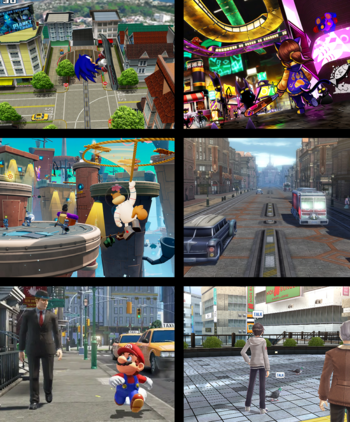 Take a turn, off the path... note Clockwise from top left: Sonic Adventure 2 (City Escape), A Hat in Time (Nyakuza Metro), The Legend of Heroes: Trails of Cold Steel (Heimdallr), Tokyo Xanadu (Morimiya), Super Mario Odyssey (New Donk City), SpongeBob SquarePants: Battle for Bikini Bottom (Downtown Bikini Bottom)
When The Hero in a video game goes on an adventure, one would expect them to go through many of the classic set-pieces. A Green Hill Zone, The Lost Woods, Shifting Sand Land, Palmtree Panic, Slippy-Slidey Ice World,
Advertisement:
Death Mountain, Lethal Lava Land, and maybe even a Space Zone for good measure. After all, they're exotic enough to offer avenues for escapism for the players.

But every so often, you get a video game level that is a little closer to home. Enter a Metropolis Level.

A Metropolis Level is a type of Video Game Setting taking place in a bustling city, complete with a maze of streets to get lost in and buildings to enter and climb on. Because of how complex these levels can get, some common themes include platforming across skyscrapers, running on streets filled with crazy traffic, vehicles being included as a game mechanic one way or another, and even missions that take the form of mundane everyday jobs.

Expect enemies to be police officers, street thugs, disgruntled or drunken civilians, organized crime syndicates like The Mafia, stray cats and dogs, and sometimes (depending on the genre), monsters, zombies and robots.

Basically, in a Metropolis Level, anything that seems mundane in reality can be turned into a game mechanic. As a result, it often comes early to mid-game at most in the Sorting Algorithm of Threatening Geography.

They may be based off cities from Real Life. In which case, expect developers to either base them off cities they're familiar with, or just use popular picks like New York City and Tokyo as main sources of inspiration.

Metropolis Levels often come in two distinct flavors: Modern (as we see them around the turn of the millennium or 20 Minutes into the Future), and Futuristic (having a more sci-fi aesthetic to them with a lot of advanced technology). Occasionally, you may get historical variants as well, taking cues from the 19th and early 20th Centuries.

Compare Graffiti Town, the more grungy urban variant, and Skyscraper City for the non-video game version. Commonly overlaps with Absurdly Spacious Sewer, Construction Zone Calamity, Down in the Dumps, Down the Drain, Amusement Park, Casino Park and Studiopolis. In RPGs, this often overlaps with Dungeon Town. If the city itself takes up the entire video game, it could be a City of Adventure.

Not to be confused with Layered Metropolis.