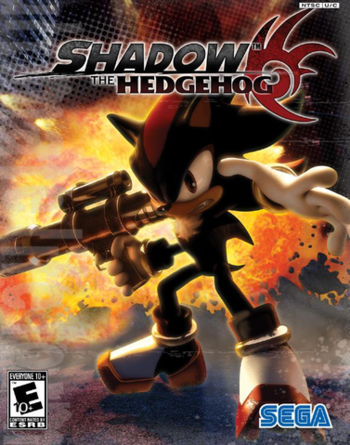 Hero or villain? You decide.
"Shadow the Hedgehog... Why does that name haunt me? It's the only thing I can remember. And that gruesome image. [...] Who am I? And why can't I remember anything? And... who is this Maria?"
— Shadow the Hedgehog
Advertisement:

Shadow the Hedgehog is a 2005 spinoff in the Sonic the Hedgehog franchise which centers on the anti-heroic black hedgehog, Shadow. The game picks up after Sonic Adventure 2 and Sonic Heroes and references many events and characters from the former, most notably Dr. Eggman's late grandfather Professor Gerald. Most of the playable characters from SA2 also appear as NPCs, along with E-123 Omega (from Heroes) and Team Chaotix (Knuckles Chaotix and Heroes).

After his apparent death and return, Shadow resurfaces in Westopolis just as the skies turn red and a UFO starts lasering the city to pieces à la Independence Day. Shadow is about to turn away, uncaring, but the alien leader calls out his name, insisting that Shadow fetch him the Chaos Emeralds. Thus begins Shadow's quest of self-discovery, culminating in an assault on the aliens' organic mothership, the Black Comet: In the Golden Ending, Shadow learns that he was created by Gerald not to destroy humanity as previously assumed, but as a counter-measure against the alien threat.

While the typical controls of the 3D entries in the Sonic series apply to some extent, the game has Third-Person Shooter elements. Pistols, SMGs, and rifles can picked up to use against enemies and you can even drive vehicles in some places. Each level has two objectives that either serve the heroes (as embodied by Sonic) or the villains (the self-interested Eggman or the human-hunting aliens). Players can take any one of 326 routes through the game's 22 levels: Option A, destroy the damn planet; Option B, have Shadow suffer alone from existential depression; Option C, let Eggman convince him he's really an android; or Option D, actually be a hero.

On another note, this game marks the debut of the 4Kids cast from Sonic X into the video games (along with Sonic Rush, which was released on the same day). Ironically, they began with the least kid-friendly Sonic game.

But How do WE Get In?

Arriving at the Black Arms' base, Shadow is told how the defenses are wired into the guards stationed outside. But how can the Black Arms-aligned get inside in the first place?

But How do WE Get In?

Arriving at the Black Arms' base, Shadow is told how the defenses are wired into the guards stationed outside. But how can the Black Arms-aligned get inside in the first place?