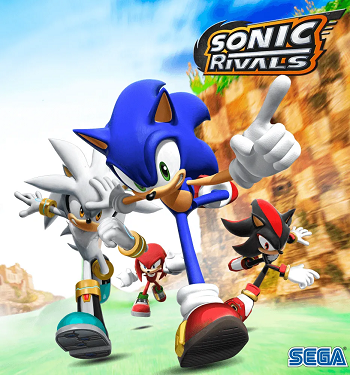 Always race to win.
Sonic Rivals is a 2006 Sonic the Hedgehog platform-racing game for the PlayStation Portable, published by Sega and developed by Backbone Entertainment in 2006 (with a sequel, Sonic Rivals 2, released in 2007).
Advertisement:

The main objective in these games is to race through each stage and beat your "rival" to the finish line. Stages are broken up by boss fights, where both characters fight against one of Dr. Eggman'snote actually Eggman Nega from 200 years in the future disguised as Eggman robots, with the winner determined by who can land more hits.

Sonic, Knuckles, Shadow, Silver, and Metal Sonic are playable in the first game, while Tails, Rouge, and Espio are added to the playable roster in the second game.

The game is canonically Silver the Hedgehog's debut in the franchise, ignoring Sonic the Hedgehog (2006).