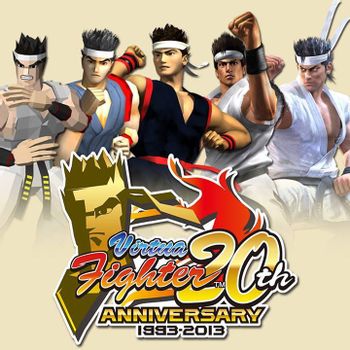 Promotional image for the 20th Anniversary showing the Art Evolution of Akira Yuki.
Virtua Fighter is a Fighting Game series produced by Sega's AM2 development team. Debuting in the arcades in 1993, it is notable for being the first truly successful 3D fighting game franchise, paving the way for the likes of Tekken and Dead or Alive.note Although Sega's lesser known Dark Edge predated Virtua Fighter by a year in having 3D movement, it used sprite-scaling technology instead of actual polygonal models.
Advertisement:

The game's story is about the dealings of the mysterious corporation, Judgment Six (J6) who holds the World Fighting Tournament as a front to create the ultimate fighter. A major recurring storyline in the game is with J6's involvement with some of the other competitors. Kage-Maru's mother, Tsukikage, is turned into Dural, the final boss of the series. Sarah and Vanessa are both kidnapped by J6, the latter used to make the newer version of Dural after Kage saved his mother.

Compared to other fighting game franchises, Virtua Fighter doesn't have much focus in its storyline. This is partially due to trying to make the combat mechanics more realistic and the depth in the characters' fighting styles as a whole and the moves they use. Virtua Fighter is known for the balance of its characters between each other. The series is also notable for being one of the few fighting game franchises to preserve its character roster throughout every entry, adding newcomers without removing any of the established fighters. The sole exception was Taka-Arashi, who was retired in Virtua Fighter 4 due to the difficulty of integrating the sumo wrestling style into the new engine, only to return in Virtua Fighter 5R.

The main lineup consists of:

Related games in the series include.

A 35 episode anime aired in Japan from October 2, 1995 – June 27, 1996. Only the first 24 episodes were dubbed into English, though the entire series has been dubbed in Spanish, Italian, and Arabic. An OVA titled Virtua Fighter Costomize Clip was also released in 1996, consisting solely of animated music videos set to songs from the Virtua Fighter image song album Dancing Shadows. The OVA is incredibly obscure, but it can be viewed here.

Akira, Pai, Sarah, and Jacky were playable guest fighters in the fifth Dead or Alive game. Akira, Pai and Dural have also made appearances in Project × Zone, with the first two together as a playable paired unit and the last as a recurring boss. Akira and Pai also returns for Project X Zone 2, although Pai is instead a solo unit and Kage-Maru replaces her as Akira's partner. Akira also appears in Dengeki Bunko: Fighting Climax as a Final Boss with Pai as an Assist Character. He even appears as an Assist Trophy in Super Smash Bros. Ultimate, in his blocky Retraux appearance from the first game.

Now has a Fanfic Recommendations page.