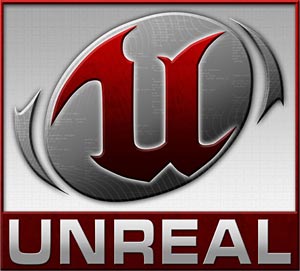 Yes, they've named their engines after this series.
Advertisement:

One of the most iconic FPS franchises, made by Epic Games. The series started as a primarily single-player game, but its multi-player successor, Unreal Tournament, saw such great success that the series has essentially split into three branches:

Lore-wise the games take place 20 Minutes into the Future, starting with the adventures of Prisoner 849, a featureless prisoner stuck in an ancient planet after the prison ship that carried her crashed onto it. While at first the series appeared to be your run-of-the-mill First-Person Shooter, what really made Unreal stuck on its time were the ginormous, gorgeous and colorful landscapes. Afterwards, the series moved onto an Anachronic Order after the release of Unreal Tournament, which started as an Expansion Pack of Unreal and became a multiplayer-focused Spin-Off of it, focused on a multi-billion intergalactic tournament managed by the Liandri Mining Corporation and sponsored by the New Earth Government. The third game of the franchise, second in the single-player series, Unreal II: The Awakening, is an interquel set between the other two games, and followed a Space Marine's adventures with his crew across many different planets. The games released afterwards have a less-clear place in the timeline due to retcons and contradicting Word of God, though nowadays it's mostly set that all of these games up to Unreal Tournament III are set after Tournament. Furthermore, with the exception of III (which instead took the War Is Hell route), all other Tournament games follow the Tournament Arc, following different seasons of the Liandri Tournament. Meanwhile, the Xbox-exclusive Championship games are set in an Alternate Universe, following the same Tournament Arc as the mainline Tournament games.

The first game in the series codified the Secondary Fire trope, and set the template for every other FPS released after it, including their 1998 competitors. Meanwhile, the first Tournament (alongside rival game Quake III: Arena) popularized the Instagib gamemode (even though it started as just another game modifier, later games and even other franchises would ascend it to main gametype) and Announcer Chatter (at least for first person shooters) tropes.

Like many popular FPS series, modding potential is a large part of its appeal and success; both the single- and multiplayer parts of the series have seen many releases. Part of the dodgy reception of UT2003 and Unreal 2 is the fact that their modding tools were half-broken. Of particular interest is the fact that almost all of the original Unreal's assets and textures are available in Unreal Tournament, so with the right mod (along with transferring the music and maps from the original game to the UT folders) it is essentially possible to turn UT into one big "super-game" with a full single and multiplayer component.

The Unreal series fell into obscurity near the turn of The New '10s due to the lack of a followup to Unreal Tournament 3, helped along by a number of outside factors: the rise of team-based / "tactical" shooters (having started around the same time as Unreal with Counter-Strike, but really reaching its peak concurrent with UT3 with the Call of Modern Battlefield glut), the rise of free arcadelike shooters (World of Padman, Nexuiz, Alien Arena, OpenArena...) taking the place of commercial ones, the overwhelming popularity of Team Fortress 2 (which combined the strategic elements of the former with Unreal's action-packed and over-the-top vibe), and Epic Games's shift in focus towards the Xbox 360 with the Gears of War franchise. However, Epic president Mike Capps was quoted as saying that the franchise is due for a revival, and with Unreal Tournament 4, they eventually delivered... at least until a much bigger success caused them to shift focus.

Furthermore, the Unreal Game Engines, one for each Tournament, have seen extremely widespread use throughout the gaming industry, with countless games in just about every genre released using Epic's code.

Recurring tropes for the series include: