Game Within a Game 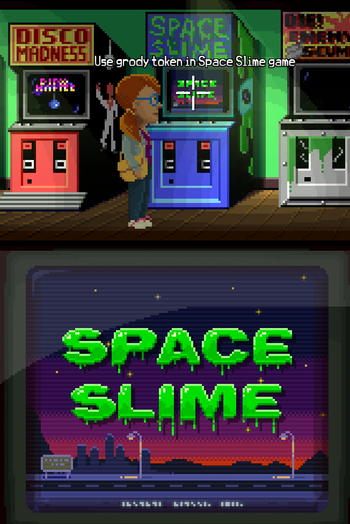 Like a Show Within a Show, this is a videogame machine or console that exists (in-universe) inside a Video Game and which the player may play to start a Mini-Game, therefore it's a Sub-Trope of the latter.
Advertisement:

The distinction between this and minigaming in general is that most minigames depict otherwise "real world" tasks (like chopping wood, fishing, or racing giant birds) tailored to the particular setting. Here, the minigame is an actual game that exists within the character's world, usually with no relevance to the surrounding plot (though this is not a requirement).

Sometimes the game is an Embedded Precursor (see that page for such examples), an older unrelated game, or a poorly disguised copy of a well-known existing game.

May overlap with Unexpected Gameplay Change and Bonus Stage. Compare Sidetracked by the Gold Saucer, depending on which one the player finds more engrossing. Or Betting Minigame where the game in question is used to farm in-game money. Or Embedded Precursor, when the game within the game is an earlier game in the series. See also Fictional Video Game and Backwards Compatibility (AKA Console Within a Console).

Interacting with this arcade machine in Inkopolis Plaza allows you to play a retro-styled minigame called Squid Jump.

Interacting with this arcade machine in Inkopolis Plaza allows you to play a retro-styled minigame called Squid Jump.