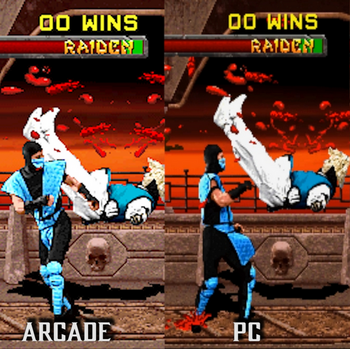 Midway Wins
Flawless Victory
A notion that's been left behind as video game consoles have increased in power, this used to be the touchstone of any Arcade Game conversion to home computer or console. An Arcade Perfect Port is a port of a video game that is touted to be indistinguishable from its source.
Advertisement:

Most 16-bit systems could reasonably claim that they could do arcade-perfect versions of early 8-bit arcade games, and these days most arcade games more than 10 years old can be said to be arcade perfect on modern home computers and consoles thanks to emulation, but the claim was made for many games that couldn't truthfully be said to be arcade perfect.

After the release of the PlayStation, arcade board makers slowly began using consoles as their arcade platform over more powerful custom made boards (Capcom's CP System III and Sega's Model 3 were the last pure custom boards to be popular), making arcade perfect ports more common place. Now, all modern arcade boards either use a home console, such as the Wii for Tatsunoko vs. Capcom or PlayStation 3 for Tekken 6, or use PC components (boards from Sega or Taito today follow this route).

This is NOT for examples where the port simply exceeds the original; that's a Polished Port. For a port to qualify as this trope, it must replicate the arcade version down to the last details of gameplay. Additionally, please limit example descriptions to how the port is arcade-perfect; don't list extra features not found in the original version, as they have nothing to do with porting accuracy.