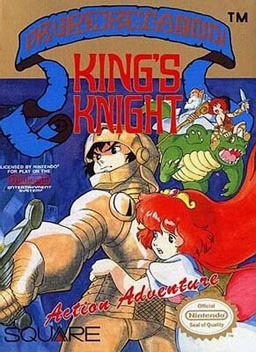 An evil dragon has kidnapped the princess of the kingdom of Izander. A group of four heroes (Rayjack, a valiant knight; Kaliva, a wise wizard; Barusa, a dragon-esque monster; and Toby, a swift thief) are called upon to rescue her. Each of the four heroes starts out by traveling through his own training stage in order to defeat monsters and obtain power-ups for the final confrontation. Once the four have completed their individual journeys, they fight as a group as they make one last charge through the dragon's castle in order to slay the dragon and restore peace to the land.

Thirty years after its initial release, Square Enix released a sequel on iOS and Android devices titled King’s Knight: Wrath of the Dark Dragon, which can also be played in Final Fantasy XV as an in-universe mobile game Noctis and company play.