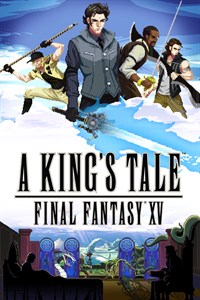 A King's Tale: Final Fantasy XV is an entry in the spinoff-releasingly popular Final Fantasy series, as a part of the Final Fantasy XV Universe project. It is a 2D Retraux Beat 'em Up spinoff title of Final Fantasy XV, starring the father of Noctis Lucis Caelum, Regis Lucis Caelum CXIII. While technically released alongside XV, it was originally exclusively available via download with preordered or Day One Edition copies of XV from specific retailers before receiving a free general release in February 2017.

One late night, a young Noctis awaits a bedtime story from his father, who has a storybook at hand. When asked what fairy tale he wants to hear, Noctis declines, stating that he's already heard them all before. When he asks for a story about his father, Regis agrees, and goes back to the days of his youth to retell the story of his quest to recover a missing crystal...

A King's Tale provides examples of: