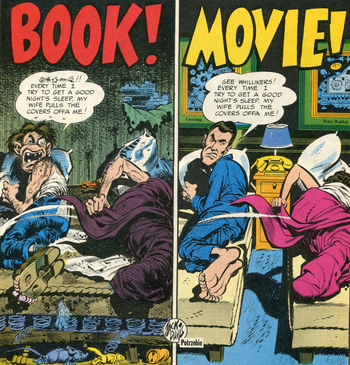 Gee whillikers! They're Sleeping Single, too!
"To be honest, you and Rupert and Emma are all too good-looking!"
— J. K. Rowling, A Conversation with J.K. Rowling and Daniel Radcliffe
Advertisement:

You've just learned that your favorite book, The Life and Times of Alice and Bob, is being made into a movie. In the book, Bob and Alice are not particularly attractive—in fact, they're both described as being very plain-looking. So why does it star Angelina Jolie and Brad Pitt?

An adaptation and biopic trope, Adaptational Attractiveness is when a someone who was originally fat, plain, or even downright ugly is played by a much more conventionally attractive actor — or, in non-live action media, is drawn/animated in a similar manner. This also applies to clothing: characters whose attire is described as grotesque will become fashionably dressed.

Although sometimes it's who can play the part best, while finding actors who look like the way the characters are described can be problematic. Because let's face it, how many ugly actors — and still fewer actresses — are there in Hollywood?

Related to Hollywood Homely. See also Race Lift, which normally doesn't have the same effect, and Progressively Prettier, when something similar happens but it's not necessarily an adaptation. When this is done to a real life person, it's Historical Beauty Update. Frequently occurs when a character is Promoted to Love Interest. See also Adaptational Skimpiness, Adaptational Curves, Hotter and Sexier, and Beauty Inversion. If the casting directors wanted the character to be ugly but an attractive actor gave the best audition, it's Ability over Appearance.

The fandom version of this is Self-Fanservice.