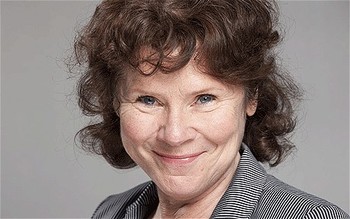 Born to Irish immigrants in North London, Staunton studied Drama at her school and, at the encouragement of her drama teacher, auditioned and enrolled in the Royal Academy of Dramatic Arts at 18. Upon graduating in 1976, Staunton spent several years in repertory theatre, earning many awards and nominations, including an Olivier Award win for playing the original Bakers Wife.

Staunton is perhaps best known to international audiences for her performance as Dolores Jane Umbridge in the Harry Potter film series, who many (including Stephen King) consider one of the best (and most universally despised) fictional villains of all time.

Her husband since 1983, Jim Carter, is an actor in his own right, best known for playing Carson on Downton Abbey. Their only daughter, Bessie Carter, is also an actress.