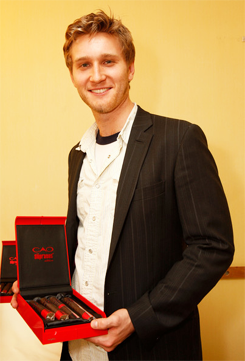 Aaron Staton (born August 10, 1980 in Huntington, West Virginia) (Pronounced "Stay-ten") is an American actor best known for his roles as Ken Cosgrove on Mad Men, and Detective Cole Phelps in the video game L.A. Noire. Aside from these, he's also had supporting and bit parts in series such as Without a Trace, Law & Order: Special Victims Unit, The Good Wife, 7th Heaven, as well as films such as August Rush and The Nanny Diaries. Along with the rest of the Mad Men cast, he has won several SAG Awards, while the series has won many Golden Globes and Emmys. He was also nominated for a BAFTA for Best Performance in a Video Game.