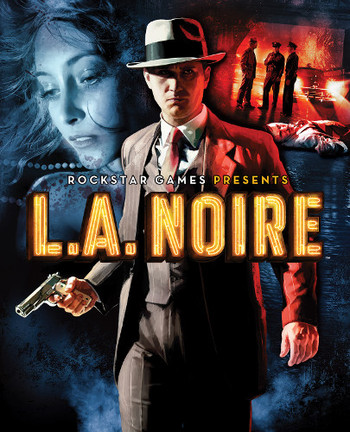 "A city of undercurrents, where not everything is as it seems..."
"In the Marine Corps, you deal with the chain of command. Mistakes get made, but you deal with 'em. You know what you're fighting for, that you're on the same team. But dealing with corruption is like chasing shadows; you never know whether the guy you're talking to is on the pad, or whether it's your partner, or maybe even the Watch Commander. So who do you trust, Cole? I made up my mind a long time ago..."
— Herschel Biggs
Advertisement:

L.A. Noire is a video game by Rockstar Games and Team Bondi, released on May 17, 2011 in North America and May 20 in Europe. You play as Cole Phelps, a By-the-Book Cop in 1947 Los Angeles, before the freeways and the Dodgers came over. You start out as a beat cop, slowly working your way up the ranks of the LAPD and investigating crimes that range from the lurid to the disgusting to the truly bizarre.

One of L.A. Noire's chief selling points is its use of innovative motion capture technology to digitize the actors' faces and expressions and put them into the game. Rather than serving as a gimmick, this is heavily incorporated into the gameplay; when you talk to people and engage in Perp Sweating, you have to read their facial expressions in order to detect unspoken emotional cues and figure out whether or not they're being honest with you, or if they're lying or hiding something.

Not related to the TV Series L.A. Noir, which has since been renamed Mob City to avoid confusion to this game.

On November 14, 2017, the game was remastered and released for the Xbox ONE, Playstation 4, and Nintendo Switch, along with a separate version for Virtual Reality platforms, subtitled The VR Case Files, that comprise a subset of the original game's cases.

While Rockstar has said in the past that they're willing to explore a sequel to the game, nothing official has been said as of 2021.