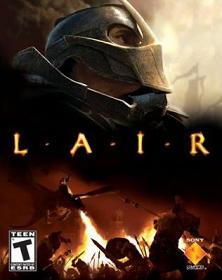 For in this world, consumed by strife, there was one belief shared by all. That whoever controlled the skies had dominion over the earth.
Advertisement:

Lair is a fantasy flight sim released by Factor 5 for the PlayStation 3 in 2007.

The world the game takes place in was once peaceful and united under a single faith until the emergence of deadly volcanoes. Poisoning the air and destroying much of the land, the people of the land soon became divided into two factions. The Mokai looked to forge a new life in the harsh land of the north, whilst the Asylians took refuge in the safe mountains of the south.

Predictably, the factions eventually clash when the Mokai launch an offensive to take the desirable lands of Asylia by force. This is where the player steps in to take control of Rohn Partridge, a "Burner" of the Sky Guard. You must defend your noble land from this threat with the aid of your fire-breathing friend. However, despite being painted as savages by the Asylian spiritual leader "The Diviner", it appears the Mokai's attacks may be motivated by desperation.

The game relied on and originally required the motion control of the PS3 Sixaxis controller for movement and many attacks, a fateful decision that led to critical panning based on control scheme alone. The alternative of a button-only control scheme was made available a few weeks after launch, but far too late for the game and for Factor 5, which soon shut down. The game's orchestral score was by first time video game composer John Debney.