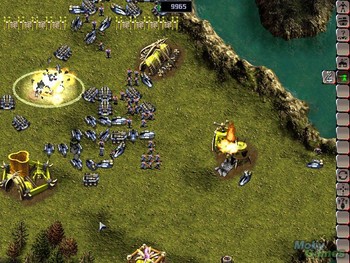 Some groups just don't get along.
Advertisement:

KKnD2: Krossfire is the sequel to Krush Kill n' Destroy (KKnD) released on October 31, 1998. It is set 2179, 100 years after the World Nuclear War. After spending another 4 decades underground, hiding from the first war against the Evolved, the Survivors rose up to a new enemy: the Series 9. The Series 9 robots are machines that have advanced from their farming origins (having the original programming damaged by the nuclear radiation) and taken up arms against the humans, Evolved and Survivor, who destroyed their precious crops, their one and only reason for functioning.