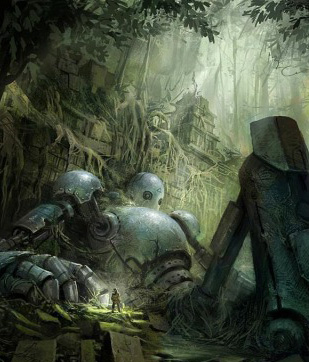 With adequate Ragnarök Proofing, a Sealed Badass in a Can is sure to awaken and heed the Call to Adventure.
Image

"To be fair, we don't invent them. We find them. They're gifts, Mr. Miles, from Those Who Came Before."
— Warren Vidic, Assassin's Creed I

The Ancients had some pretty neat gear. Robots, weapons, even the answer to The Ultimate Question of Life, The Universe, and Everything. Easy to use, little or no maintenance required, and after thousands of years of neglect often still in perfect working order!

...oh yeah, and this technology completely and utterly destroyed the Ancients and most of the world with it. But that doesn't stop the villains (or the heroes) from wanting to get some for themselves by pillaging an Advanced Ancient Acropolis. Usually, said Lost Technology then tries to destroy the world again. Some, but not all, heroes are smart enough to try to keep people away from the stuff.

Occasionally the good guys need Lost Technology to combat ancient evils that have arisen again (or villains who have acquired Lost Technology of their own). They usually use it as best they can, despite Black Boxes. Still, they suffer from Low Culture, High Tech.

It is similar to Imported Alien Phlebotinum, with the catch that the current population comprises the survivors or replacements of an age that fell due to its arrogance, war, or some other catastrophe.

In real life, this trope is a main reason to document your research and development work and leave clear schematics/source code/some descriptions somewhere your successors (or you) can retrieve them when need arises. It may seem boring and redundant now, but it saves lots of time and money on reverse engineering the things your facility is supposed to know several years/decades later.

May also show up in the guise of Lost Magic in fantasy settings. Often a consequence of No Plans, No Prototype, No Backup. Also see Sufficiently Advanced and Pointless Doomsday Device. Compare Bamboo Technology. A subtrope of Older Is Better. Frequently overlaps with Sufficiently Advanced Bamboo Technology. May lead to an Archaeological Arms Race.