Theatre / We Will Rock You 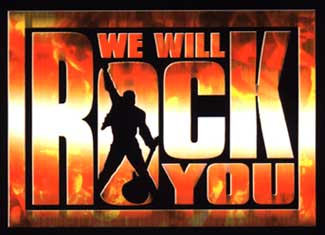 "It's not just a title. It's a promise."
We Will Rock You (WWRY or Rock You for short) is a Jukebox Musical by Queen and Ben Elton. The musical was first produced in London by Queen Theatrical Productions, Phil McIntyre Entertainment and Tribeca Theatrical Productions, with Christopher Renshaw as director, Mark Fisher as the production designer, Willie Williams as the lighting designer, Williams & Fisher as co-video directors, Tim Goodchild as the costume designer, Arlene Phillips as choreographer and Bobby Aitken as sound designer. The story takes place in a tongue-in-cheek dystopian future where originality and individualism are shunned, and a lone "Dreamer" appears who can fulfill a prophecy that will enable the return of rock 'n roll.
Advertisement:

It first opened in the West End at the Dominion Theatre on May 14, 2002, with Tony Vincent, Hannah Jane Fox, Sharon D. Clarke and Kerry Ellis in principal roles. The musical was panned by critics, but was an audience favourite and is the longest-running musical at that venue (finally closing after 12 years on May 31, 2014). Many international productions have followed the original, and We Will Rock You has been seen in Australianote first in 2003-05, , then an updated version starting in 2016, North Americanote a one-act version in Las Vegas from 04-05, a run in Canada from 07-09, then a three-country tour in 13-14, Russianote in 14-15, with dialogue and most of the songs translated to Russian, but closing after 4 months due to production disagreements, Spainnote 03-04, then with a new cast in 07-08, Japannote with the Australian cast in 05, then in 06-07 with some roles recast, South Africanote 06, Switzerland, Germany and Austrianote 06-07 in the former, 08 in the latterand also a Tour in 2014/15 (Germany/Austria), Australasianote 07-08, with a mix of London, Australian, and South African cast members, and visiting New Zealand, South Korea, Singapore, Thailand, and Hong Kong, Italynote First in 09-10, then in 18-19 with a new version with minimum cast changes, Sweden, Norway, Belgium, Brazil, and at seanote aboard the cruise ship Anthem of the Seas.

A workshop script version of the show lasted up until and around the first few previews, when it was tested and changed accordingly. This can be found sometimes around the net, but is rare.

A sequel and a film adaptation are reportedly in the works.

The time is the future, in a place that was once called Earth. Globalisation is complete! Everywhere, the kids watch the same movies, wear the same fashions and think the same thoughts. It's a safe, happy, Ga Ga world. Unless you're a rebel. Unless you want to Rock. On Planet Mall (in later versions, the iPlanet) all the musical instruments are banned. The Company Computers generate tunes and everybody downloads them. It is an age of Boy Bands and of Girl Bands. Of Boy and Girl Bands. Of Girl Bands with a couple of boys in them that look like girls anyway. Nothing is left to chance, hits are scheduled years in advance.

But Resistance is growing. Underneath the gleaming cities, down in the lower depths live the Bohemians. Rebels who believe that there was once a Golden Age when the kids formed their own bands and wrote their own songs. They call that time, The Rhapsody.

Legend persists that somewhere on Planet Mall instruments still exist. Somewhere, the mighty axe of a great and hairy guitar god lies buried deep in rock. The Bohemians need a hero to find this axe and draw it from stone. Is the one who calls himself Galileo that man?

But the Ga Ga Cops are also looking for Galileo and if they get him first they will surely drag him before the Killer Queen and consign him to Oblivion across the Seven Seas of Rhye. Who is Galileo? Where is the Hairy One's lost axe? Where is the place of living rock?

We Will Rock You contains examples of: