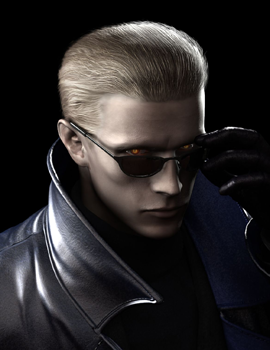 "Syme's eye always caught the black glasses and the blind grin. [...] They took away the key of the face — you could not tell what his smile or his gravity meant. Partly from this, and partly because he had a vulgar virility wanting in most of the others, it seemed to Syme that he might be the wickedest of all those wicked men."
— The Man Who Was Thursday, G. K. Chesterton
Advertisement:

Sun never sets on an asshole.

This trope is where Scary Shiny Glasses meets Cool Shades. Quite a bit of villains wear shades for some reason. Usually they hide the malice from the eyes of the one wearing them. If you're Making a Spectacle of Yourself, invoking this trope will fail horribly.

Examples are numerous, including The Men in Black, members of secret societies, CIA agents, mafiosi, Yakuza, sinister police officers, Agent programs in the Matrix... you get the picture. Not always associated with villainous characters but usually a deliberate attempt to intimidate, so chances are that if a hero wears these, they're an example of Good Is Not Nice if not a full Anti-Hero. Compare Four Eyes, Zero Soul. Gas Mask Mooks takes this a few steps further.