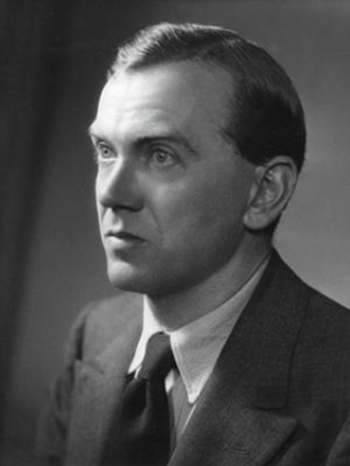 "I had to find a religion to measure my evil against."
Advertisement:

Henry Graham Greene OM (2 October 1904 – 3 April 1991) was an English novelist, essayist, film critic and screenwriter. In his lifetime he managed to achieve fame among the literary establishment while also remaining a popular author of genre fiction. As a novelist and essayist, he was highly singular in his political, moral and personal views.

Greene was born in Berkhamsted, Hertfordshire to a large, influential family that included the owners of Greene King Brewery, bankers, and statesmen; his mother was cousin to Robert Louis Stevenson. From his early youth, Greene suffered from depression and was given to flirting with suicide by playing Russian Roulette. After studying history at Balliol College, Oxford, he found work as a journalist and in 1926, he married Vivienne Dayrell-Browning and converted to her religion of Roman Catholicism. Religion proved to have a major influence on the previously agnostic Greene; he became immersed in Catholic theology and beliefs, the ideas of sin and redemption, many of which seeped into his fiction. Politically, Greene was on the left, and was even sympathetic to Communism in spite of its anti-clerical and anti-religious nature. Greene expressed support for liberation theology and was of the opinion that "Conservatism and Catholicism" ought to be "impossible bedfellows" and he was critical of the counter-revolutionary support of Church authorities while sympathetic to independent priests and reformers.

Greene worked in The Great Depression as a writer of thrillers (A Gun for Sale, Stamboul Train) and essayist. He worked as a film critic during this time, and earned fame for his acerbic wit and criticism. His favorite film-maker was Fritz Lang and he was one of many English critics who missed the boat on identifying Alfred Hitchcock's early genius. One piece of his criticism, a 1937 review of Wee Willie Winkie published in the journal Night and Day, earned Greene some notoriety

for calling attention to the sexualisation of child star Shirley Temple. It was so controversial that the studios sued the journal, Greene hid away in Mexico, and the journal shut down. While in Mexico, Greene started research on The Power and the Glory (his first literary novel). Greene became a constant traveler in his later years, visiting far away nations and writing about them in his works. His use of locations earned the name "Greeneland". His travels also attracted him to real-life spy work with MI6. One of his handlers was none other than infamous turncoat Kim Philby.

Greene's works were popular enough that it led to a series of film adaptations. Most of them were disliked by Greene. He is best known for his collaborations with Carol Reed, especially, The Third Man. Greene's work remained popular and he remained a highly prolific author. He influenced many later writers, and his particular style — featuring bleak, misanthropic anti-heroes, complicated moral questions, and vivid background detail — makes him a highly popular author to this day.

In 1973 he had an uncredited cameo as a British insurance company representative in the film Day for Night. He had told a friend how he'd always wanted to meet its director François Truffaut, as he was a huge fan of his films, so it was arranged for him to have a small part in the film. Truffaut was disappointed when he found out about Greene's appearance only after Greene had left, because he had been a huge fan of Greene's writing!

Not to be confused the Canadian actor of the same name.