Film / Travels with My Aunt 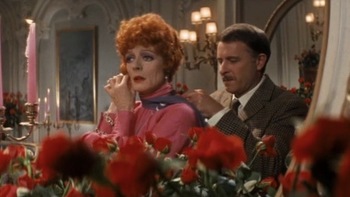 Travels with My Aunt is a 1972 comedy film directed by George Cukor, loosely adapted from the 1969 novel of the same by Graham Greene.

It is the whimsical story of a starchy English banker and his madcap aunt. One Henry Pulling (Alec McCowen) is the starchy banker, a fellow who can rattle off the pound's conversion to dollars, francs, and lira off the top of his head, and who has no interests other than the dahlias in his garden. Henry is attending his mother's funeral when his long-lost – and believed dead – Aunt Augusta (Maggie Smith, buried under tons of old-age makeup) shows up, much to his surprise.

Augusta is eager to make a connection with the nephew whom she hasn't seen in decades. However, the reunion is soon disturbed when Augusta receives a grisly package: the severed finger of her old boyfriend and true love Ercole Visconti (Robert Stephens), a roguish Italian who is being held hostage by Mafia gangsters. Augusta goes on a wacky trans-European quest to raise the £100,000 she needs to liberate her beloved Ercole, with Henry unwillingly tagging along.

Tropes with My Aunt: