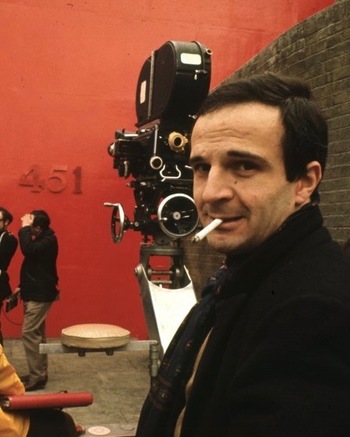 "The film of tomorrow appears to me as even more personal than an individual and autobiographical novel, like a confession, or a diary."
Advertisement:

François Roland Truffaut (6 February 1932 – 21 October 1984) was an influential French filmmaker and occasional actor. He is hailed as one of the progenitors of the French New Wave, and as one of the greatest directors of all time.

Truffaut is probably most famous for his first autobiographical film, The 400 Blows, which helped bring in the New Wave and was the first of several films featuring the character Antoine Doinel. He is also notable for directing the adaptation of Ray Bradbury's book Fahrenheit 451 — his only English-language film. To do so, he turned down the chance to direct the landmark film Bonnie and Clyde, but inadvertently set Warren Beatty on the course of not only starring in it, but producing it and getting Arthur Penn direct it instead. In this manner, Truffaut could be said to have helped spark the New Hollywood era of American film in a roundabout way.

In 1973, he made Day for Night (La Nuit Americaine) a movie about the making of a movie, which won the Academy Award for Best Foreign Language Film, making him the only director of his group to recieve that honour.

He did an extensive series of interviews with friend and idol Alfred Hitchcock in 1962, which were published in English as Hitchcock/Truffaut four years later. To this day the book is an interesting insight into the world of movie making and the mindset of one of the 20th Century's greatest directors, and which went on to influence many film professionals such as Wes Anderson, Peter Bogdanovich, David Fincher and others. The interviews themselves became the subject of a 2015 documentary film, also called Hitchcock/Truffaut.

A general audience would most likely recognize him as the French scientist Lacombe from Steven Spielberg's Close Encounters of the Third Kind, his only English-language acting role and the only one in a film he didn't direct himself.

Former Trope Namer for Do Not Do This Cool Thing.