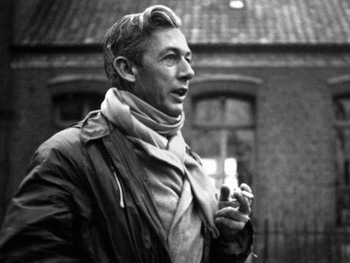 "Bresson is to French cinema what Mozart is to German music and Dostoevsky is to Russian literature."
— Jean-Luc Godard
Advertisement:

Robert Bresson (25 September 1901 – 18 December 1999) was a French film director known for working chiefly with non-professional actors and for his unique, inimitable, and — if you’re in the mood — ultra-low-key but hauntingly powerful style of filmmaking.

Bresson is sometimes associated with the French New Wave movement, but he was actually considerably older than the likes of François Truffaut, Jean-Luc Godard, Éric Rohmer, and Jacques Rivette. However, they all tended to revere him, especially Godard, and he was if anything even more of an influence on other filmmakers such as Andrei Tarkovsky, Rainer Werner Fassbinder, The Dardennes, Aki Kaurismäki, Martin Scorsese (Taxi Driver is very Bressonian) and, in particular, Taxi Driver’s screenwriter Paul Schrader, whose book Ozu / Bresson / Dreyer: Transcendental Style in Film contains some of the acutest writing about Bresson.note Two of Schrader’s films, American Gigolo and Light Sleeper, contain endings which are, as he freely acknowledges, a direct homage to the end of Bresson’s Pickpocket.

Bresson is an unusual director from TV Tropes' point of view because he was notably trope-averse. After his first couple of movies he started using non-professional actors, not because he was too cheap or was trying to make some point about actors as such but because he didn't like what professional actors bring to films, namely performances, and all the tropes that go with them, from Method Acting to Chewing the Scenery and all stops in between. His whole method of storytelling means that you just don't get those beats where the audience wants to punch its collective fist in the air, or burst out laughing, or go "Awwwww". This often has the effect of annoying non-admirers, and Bresson didn't make things better with some of his more pompous and oracular remarks on the subject, in which he sometimes came across as believing that only he made real cinema, and all other filmmakers were basically making filmed theater.

As a result, it's probably easier to characterise his films in terms what tropes they avert. Nevertheless, tropes are present in his films as they are in everyone else's, and sometimes to great effect.

Tropes common to Bresson and his works include: