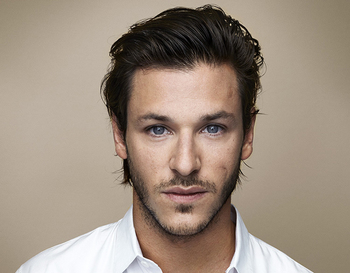 He was nominated twice for Most Promising Actor at the César Awards, first with André Téchiné's Les égarés in 2003, then with Jean-Pierre Jeunet's A Very Long Engagement in 2004, and won the latter. He was also nominated for Best Actor for Saint Laurent in 2014, then won the award in 2017 for Xavier Dolan's It's Only the End of the World. He was also the face of the Chanel men's perfume fragrance "Bleu de Chanel".

He died at age 37 on January 19, 2022 from cranial trauma following a ski accident in the French Alps. He had a son born in 2016 with his then-girlfriend, model Gaëlle Piétri.

Tropes applying to his roles: