Film / Brotherhood of the Wolf 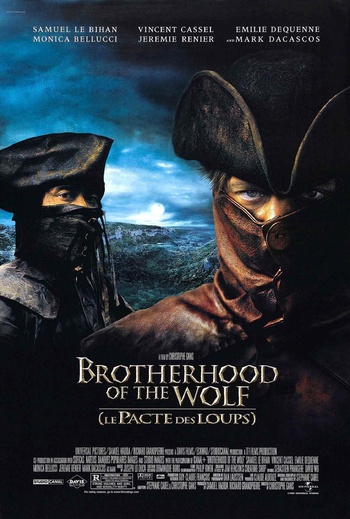 Brotherhood of the Wolf (Le Pacte des Loups in French) is a 2001 French historical action/mystery/horror film directed by Christophe Gans, who was previously known for his Live-Action Adaptation of Crying Freeman.

It is very loosely based on the real, historical mystery of "the Beast of Gévaudan" — a creature which allegedly killed almost 100 people, most of them women and children, over a three year period in a remote, rural area of 18th century France corresponding to modern-day Lozère. In the summer of 1764, King Louis XV arranged a great hunt, and a wolf claimed to be the beast was slain, but subsequently more killings took place. "The Beast" has never been identified.

Fronsac and Mani are quickly enlisted to hunt down the beast and study it. Along the way, they encounter a mysterious group of gypsies and a number of sleazy aristocrats. Vincent Cassel plays a one-armed hunting enthusiast who also takes an interest in the beast, Monica Bellucci plays a seductive Italian prostitute who is far more than she seems, and Jérémie Renier plays a young nobleman who assists Fronsac.

Overall, the film is notable for cramming just about every possible genre it can into its rather generous running time. It's a kung fu film, a monster movie, a mystery, a romance, a political thriller and a historical epic all rolled into one.

Tropes evident in Brotherhood of the Wolf include: