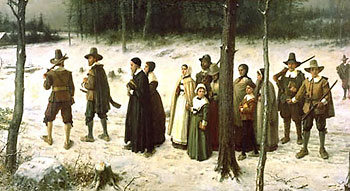 "...most dismal wretches, who said their prayers before daylight, and then wrought in the forest or the cornfield till evening made it prayer time again."
— Nathaniel Hawthorne, "The Maypole of Merry Mount"
Advertisement:

The period in America from around 1607–1763, during which just about everyone was a Puritan or Pilgrim and had to attend church services that were approximately eleven days long. Everyone wore black all the time; the men all carried blunderbusses and wore tall hats with big buckles around them,note The hats are called capotains and are period-accurate; the buckles, however, are not. while the women all wore bonnets and square linen collars with optional large red A's. note This option was generally discouraged — but then, everything, and everyone, was generally discouraged.

The women were all called "Goody Somethingorother" note A contraction of 'Goodwife'. The male equivalent is Goodman. and were frequently burned at the stake as witches (especially in Salem, Massachusetts). Occupations among the men, besides the aforementioned prayer and witch-burning, included persecuting Quakers, oppressing Native Americans, being scalped, and hunting turkeys for the first Thanksgiving Day dinner.

People came here expecting to get rich quick, and it almost never happened. Most of them remained poor or indentured servants all their lives. In not a few cases, people also left the colonies for "the old continent" after having failed to strike it rich there. In the southern colonies, everyone was more concerned with digging for gold that didn't exist than with growing food, at least until they began growing tobacco and made loads and loads of money. They also brought in some slaves during this time, which would lead to some rather heated disagreements years down the line.

The colonies were mostly self-governing since it was pretty much impossible for Parliament to heavily govern settlements months away. They also began practicing primitive forms of democracy during this time, especially in New England and Pennsylvania. Still, the monarchy had some level of control; royal colonies were the ones where the king appointed the governor himself, and the list grew larger over the years. Hey, maybe slowly having their self-governing institutions come under the direct authority of a monarch living months away would lead them to protest this or something. Almost all of the colonies had established churches supported with taxpayer money.

This era is coincidental with The Cavalier Years across the pond.

Here is some information on the founding and history of each colony (founding date in parentheses):

P.S. Not to be confused with the United States' seldom-mentioned foray into colonialism, which properly began in the late 19th century with the defeat of Spain in the Spanish-American War and the seizure of its then-colonies: the Philippines, Cuba, Puerto Rico and Guam, as well as Hawaiʻi.