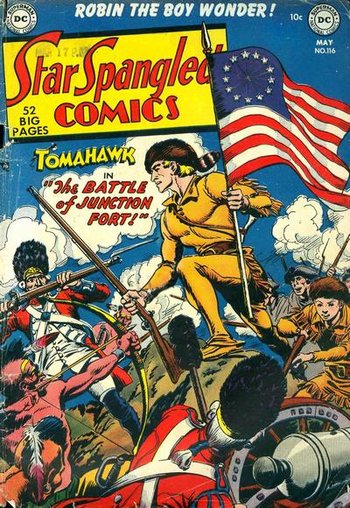 Tomahawk is a comic book character whose adventures were published by DC Comics during the 1940s, 1950s and 1960s as a backup feature in Star Spangled Comics and World's Finest Comics and in his own eponymous series. He was created by writer Joe Samachson and artist Edmund Good, and first appeared in Star-Spangled Comics #69.

Known as either Tom Hawk or Thomas Haukins, depending on which of two versions of his published history the reader prefers, "Tomahawk" was a soldier who served under George Washington in the warfare between the British, French and Iroquois forces during the decades prior to the American Revolutionary War and acquired his nickname due to its resemblance to a trademark weapon of the Iroquois Confederacy's warriors, and to the skill he developed with that weapon.

He subsequently achieved further fame as one of Washington's most capable operatives during the Revolution itself, leading a band of soldiers under the informal nickname of "Tomahawk's Rangers".