Literature / The Areas of My Expertise 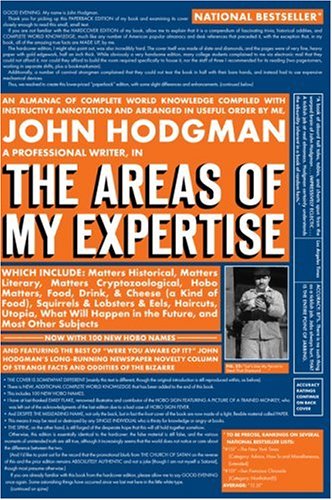 "All of the historical oddities and amazing true facts contained herein are lies, made up by me — and it is this astonishing innovation that allows each entry to contain more truths than if it were merely factual... Truth may be stranger than fiction, goes the old saw, but it is never as strange as lies, or for that matter, as true. Proof of which maxim is the fact that I just made it up."
Advertisement:

Short for:
An Almanac of Complete World Knowledge Compiled with Instructive Annotation and Arranged in Useful Order by Me, John Hodgman, a Professional Writer, in the Areas of My Expertise, which Include: Matters Historical; Matters Literary; Matters Cryptozoological; Hobo Matters; Food, Drink, & Cheese (a Kind of Food); Squirrels & Lobsters & Eels; Haircuts; Utopia; What Will Happen in the Future; and Most Other Subjects; Illustrated with a Reasonable Number of Tables and Figures, and Featuring the Best of "Were You Aware of It?", John Hodgman's Long-Running Newspaper Novelty Column of Strange Facts and Oddities of the Bizarre.

As the name implies, it is a book of trivia written by John Hodgman, better known as a PC, and as The Daily Show's "Resident Expert". Every single fact in it is a lie ... or is it?

It is intelligent, absurd humour, and primarily a parody of Poor Richard's Almanack, written by Benjamin Franklin, and more broadly, a pastiche of almanacks and trivia books in general. In order to properly get every joke in it, you'd need to take a course. (In fact, one can imagine students in the far future doing so. ELL 321: Early 21st Century Comedy: John Hodgman).

The audiobook version, which in many ways is even more hilarious, is read by Hodgman in his trademark deadpan style. It also features Jonathan Coulton singing the book's theme song, the songs of the various American states, and generally acting as Hodgman's foil and straightman throughout.

The first in the Complete World Knowledge trilogy, followed by More Information Than You Require and That is All.

This book provides examples (and parodies) of: