Literature / That is All 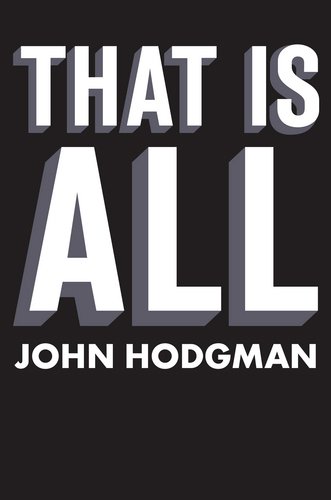 "And as the dull, watery sun washed out those long nights, I would go back up to my room and I would look into my mirror, and I would ask in the queasy dawn:
WHO AM I?
And the mirror would answer:
MY NAME IS JOHN HODGMAN. But that is all over now." 240 "The mirrors at the Chateau Marmont are AMAZING."
Advertisement:

Short for:
As Long Threatened and Longer Postponed, Herein you Will Find: A Third Compendium ("Tri-Pendium") of Complete World Knowledge, Now and Finally Complete, As Set Down by Me, A Former Professional Literary Writer; A Former Former Professional Literary Agent; A Minor Television Personality Who Is Arguably Still Famous In Some Circles; and ... A Current DERANGED MILLONAIRE, Who Is Known In Your Language as JOHN HODGMAN Simultaneously Covering and Uncovering Such Previously Un-touched-upon Subjects As... The Practice and Pronunciation of "Oenophilia"; The Ancient Teachings of The Americanomicon; The Meaning of your Dreams; Gentleman Criminals; How Boats Work; How To Raise Sperm Wales; The Secrets of The Master Magicians; How To Finally Become Happy and Wealthy As A Deranged Millionaire Before The Coming Global Super-Collapse and The End of Human Civilization, aka "Ragnarok"; Plus: Sports! As Well As Most Other Subjects, At Last In Such Sufficiency As To Report: THAT IS ALL

The final entry in the Complete World Knowledge trilogy, John Hodgman's last book of fake trivia, and, quite possibly, the last book ever to be printed before the arrival of RAGNAROK and the end of the Earth.

Compared to The Areas of My Expertise and More Information Than You Require, That Is All retains the humor of its predecessors even as it takes a much darker tone. Hodgman's fame is waning, and now, a newly-minted Deranged Millionaire, he's taken it upon himself to document his Albuterol-induced visions of the final year of human civilization.

This book provides examples of, and parodies, the following tropes: