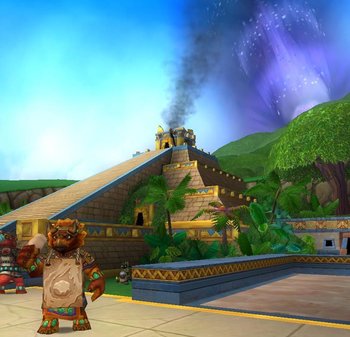 Once upon a time, people thought December 21, 2012 was The End of the World as We Know It. Silly, right? Well, a surprising number of people took this seriously. Where did this date come from, you ask? Well, let's sort out fact and fiction:

So, what was supposed to happen on December 21, 2012? Well, there were some fun predictions:

As you may have noticed, none of this stuff ever happened. However, popular culture had a lot of fun with the supposed doomsday and that's what we're here to record.note Fun fact for posterity, by the way: This page was launched on December 22, 2012.

Now that December 21, 2012 has come and gone, it's safe to say that this is now a Discredited Trope. It made a comeback in early 2021 due to the ongoing COVID-19 Pandemic and polarized political climate in the U.S., leading to a lot of dyslexia jokes. Just like with the 2012 doomsday, however, this one also didn't happen.