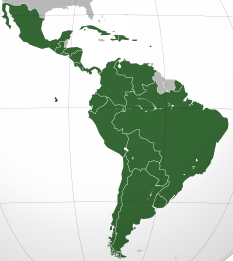 Useful Notes on those places that are in the more Latin-influenced parts of the Americas.
Advertisement:

Latin America is a name that has gained prominence in the 19th century thanks to the French, who were the first to propose the term. As its name implies, it is the part of the Americas that is mostly influenced by the countries of Latin heritage (Spain, Portugal and France); however, in culture, only some parts of the Francophone (particularly those in the Caribbean) would be considered Latin, while the others like Canada are more Anglo influenced.

As a whole, Latin America englobes most of the eponymous continent from Mexico to Argentina, with the exceptions of Belize, Guyana and Suriname, which are primarily Indo-Caribbean in culture. Historically, it was influenced by Catholicism, which in many of the countries has been designed the primary religion (but not state-endorsed), although Evangelicalism has recently gained considerable popularity.

The term itself has provoked some problems regarding the usage of the name Latin or Latino, given that these terms are also used commonly to refer to the people born in Latin America, although they originally meant someone born in Lazionote Ancient Latium, Italy.