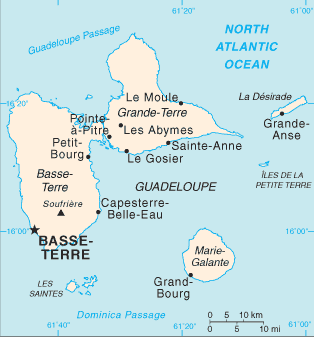 Guadeloupe (Antillean Creole: Gwadloup) is an overseas region of France located in the Caribbean, and the largest European Union territory in North America in both size and population. The name Guadeloupe came from Christopher Columbus, who landed there in November 1493 while seeking fresh water, naming it Santa María de Guadalupe de Extremadura after the Virgin Mary in Extremadura, Guadalupe in Spain. He also discovered the pineapple there, although the fruit had long been grown in South America. The capital of the territory is Basse-Terre, and the largest city is Pointe-à-Pitre. Part of the European Union and Eurozone, it uses the Euro as its currency, and any European Union citizen is free to settle and work there indefinitely.
Advertisement:

Guadeloupe is wealthier than most of the other countries and territories in the Caribbean, and get a higher number of immigrants than many of the others as a result. While French is the official language, most of the population also speak Guadeloupean Creole, a variant of Antillean Creole French, which was also the language of local community in the colonial throughout the island's colonial history and was claimed as key to local cultural pride and unity.

The territory was tossed back and forth between the British and French multiple times in history, with Britain seeking the sugar trade of the island in the 17th century, as Guadeloupe produced more sugar than all the British islands combined, worth about £6 million a year. The British first captured Guadeloupe in 1759, before returning it to France with 1763 Treaty of Paris at the end the Seven Years' War, then took control of it again in the 21st of April, 1794, taking advantage of the conflict between the monarchists and republicans on the island at the time and an ensuing slave rebellion, before surrendering in December 1794, with the republican governor Victor Hugues freeing the slaves and those freed slaves taking control of the islands.

The island was recaptured by the French in 1802, but the British took control of it once again in the 4th of February, 1810 and occupied it until 1816, with the island briefly coming under Swedish control for 15 months on the 3rd of March, 1813, before the Swedes gave it back to the French with the 1814 Treaty of Paris, and then French control of the territory was definitively acknowledged by the 1815 Treaty of Vienna. 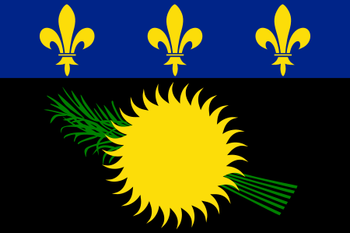 Let us go, children of the motherland,
The day of glory has come!
Against us, the tyranny's
bloody flag has been raised.
Bloody flag has been raised.
Can you hear in the countryside,
These ferocious soldiers bellowing?
They come all the way into your arms
To cut your sons and wives' throats!
To arms, citizens!
Form your battalions!
Let us march, let us march,
And let an impure blood flow into our furrows!
Government