French Guiana (French: Guyane française), officially Guiana (French: Guyane), is a French overseas department and region north of Brazil and east of Suriname in South America. It is the only territory on the mainland Americas that is still part of a European country, and is the second-largest region of France and the largest outermost region within the European Union, though it is sparsely populated with half of its population living in the capital and largest city, Cayenne.

French Guiana was originally inhabited by Native American tribes including the Arawak, Emerillon, Galibi, Kalina, Palikur, Wayampi and Wayana, with the French first attempting to create a penal colony there in the 18th century. However, things did not go well for the French, with 10,000 of the territory's initial 12,000 settlers being killed by the tropical climate and diseases. An infamous prison, the Île du Diable (Devil's Island), was set up there and operated from 1852 to 1953, with 56,000 prisoners being transported there by France, fewer than 10% surviving their sentence, and those who did requiring forced residencies by the French in the late 19th century. The Portuguese briefly took over French Guiana in 1809 before it was returned to France with the signing of the Treaty of Paris in 1814, though a Portuguese presence still lingered there until 1817. After the French withdrawal from Vietnam in the 1950s, France also helped resettle Hmong refugees from Laos to French Guiana in the 1970s.

One of the things French Guiana is most known for is its space-travel base. It was constructed under Charles de Gaulle's presidency in 1964 to replace the Sahara base in Algeria and stimulate economic growth in French Guiana, and the territory was considered particularly suitable for the purpose because it is near the equator and has extensive access to the ocean as a buffer zone. Since the initial launches of the Véronique rockets, the Guiana Space Center, located near the coast of Kourou, has grown considerably, and is now part of the European space industry and the main spaceport for the European Space Agency, having commercial success with launches like the Ariane 4 and Ariane 5 rockets. 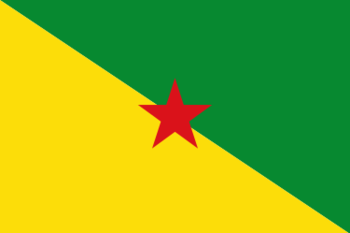 Let us go, children of the motherland,
The day of glory has come!
Against us, the tyranny's
bloody flag has been raised.
Bloody flag has been raised.
Can you hear in the countryside,
These ferocious soldiers bellowing?
They come all the way into your arms
To cut your sons and wives' throats!
To arms, citizens!
Form your batallions!
Let us march, let us march,
And let an impure blood flow into our furrows!
Government