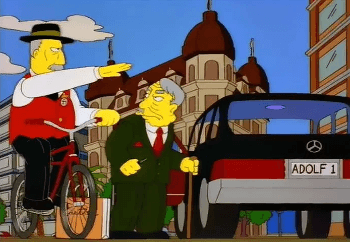 Buenas noches, mein Führer!
"Yeah, I met a fella down here in Brazil with lots of fantastic war stories. He's ninety-two, bitter, and speaks with a German accent. You do the math." note  Fun fact: Brazil had a sizable population of German immigrants even before WWII (as well as Japanese, and especially Italians), many of which served in the Brazilian Army during the war (in which Brazil sided with the allies).
— Ed Alzate, Last Man Standing (2011), "The Fight"
Advertisement:

Not all stories involving Those Wacky Nazis are set in World War II. Sometimes they are set in the aftermath or even the present. Some Nazis have escaped from defeat and/or trial, and are lurking in a hidden base laying plans to restore the Reich and Take Over the World (as if a few guys in a hidden lab had better chances than a whole country). Or in more realistic stories, they're just trying to evade justice and fondly remembering what fun they had in the camps. Perhaps the hero, or a Nazi Hunter, is chasing such fugitives; perhaps they have treasures, perhaps some Lost Technology or MacGuffin, or perhaps they simply need bringing to justice. Many times, said Nazis are hidden in Argentina or elsewhere in South America.

Having actual WWII fugitives hanging around in the present is becoming a Dead Horse Trope (except in period pieces) for obvious reasons — any survivors nowadays (including former members of the Hitler Youth, who are now in their nineties) are going to be pretty ancient without some Nazi Superscience (or Nazi Necromancy) to keep them fresh or spruce them up. However, they could still be used as Back Story, to give a run-of-the-mill Evil Scheme that unmistakable Nazi flavour. Or have their children, grandchildren or followers raised in "the faith".

For details on the real-life accuracy of this trope, see the analysis subpage.

Sometimes the escaped Nazis are hiding in Antarctica, or on the Moon.

Subtrope of Run for the Border.