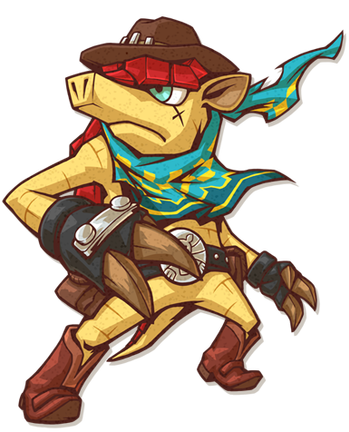 Although they are not often seen in fiction, armadillos are often associated with The Wild West when they do appear, and are occasionally given stereotypical traits of cowboys or depicted wearing cowboy attire.

This is likely because the most widespread armadillo species — the nine-banded-armadillo — is common in the southern United States, including the state of Texas. Additionally, the association with cowboys in particular may come from the fact that armadillos' leathery shells both easily lend themselves to said depictions and give them a reputation as hardy animals.

Subtrope of National Animal Stereotypes, for America (and the state of Texas in particular) and Mexico. For another stereotype of armadillos, see Shy Shelled Animal. For another animal emblematic of the West, see Western Rattlers.