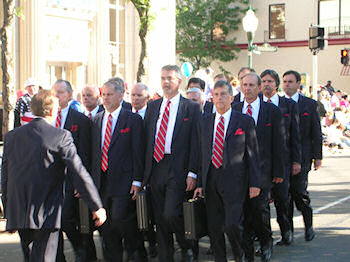 Exactly What It Says on the Tin. These are mooks in suits, used for intimidation. When a character in a story feels he's been wronged (or feels he can get away with breaking the law), he'll often threaten to call upon his army of lawyers. Especially when said character is rich. (Sometimes, the army is called "my legal team", same diff. In other words, lawyer overkill.)

Sometimes that Army can actually be seen in a show, and when they are, they are invariably marching in ranks behind the character, in step and double-file (and often with an added parodic sound effect of marching jackboots). Occasionally it will be a team of Yes Men or Middle-Management Mooks rather than lawyers, but with the same effect: a martial show of force in a corporate or legal setting. Sometimes the Army will be acting on behalf of an unseen (usually evil) client, all members of the Army working toward one ominous goal.

Compare Evil Lawyer Joke, You Wanna Get Sued?. No direct relation to the possibility that The Army will press charges on someone and use the best lawyers they have, even though that possibility could involve an Army of Lawyers and is very scary once you give it a few seconds' thought.