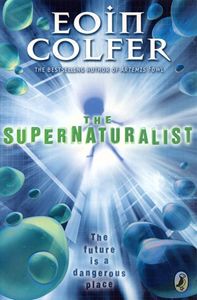 The Supernaturalist is a Cyberpunk novel by Eoin Colfer. In the future, fourteen-year-old Cosmo Hill escapes from the abusive Clarissa Frayne Institute for Parentally Challenged Boys in an product-testing accident that nearly takes his life. He's saved from his injuries and a pack of strange alien-creatures invisible to all but those dying or survivors of a near-death experience, by a group of teenagers calling themselves "The Supernaturalists." The Supernaturalists believe the creatures, which they call "Parasites," suck the life out of the wounded or dying and are set on destroying them.
Advertisement:

However, they soon discover a horrifying secret that turns their world upside-down and gets them caught in a web far more complicated than anything they've ever imagined before.

A graphic novel adaptation was released in 2012 by Disney Hyperion Books.