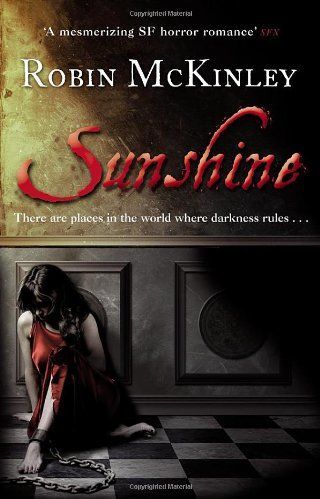 Sunshine is a novel by Robin McKinley. It tells the story of Rae "Sunshine" Seddon, a young woman who works in her stepfather's coffeehouse as a baker. The novel is set in a unpleasant alternate reality about ten years after the Voodoo Wars. These wars left the world in rather a mess — "bad spots", effectively magical toxic waste spills, get mentioned several times.

The novel begins with a ten-page Infodump about the title character's life as a coffeeshop baker, followed by five pages of Expospeak about her world's vampires. After that, the book moves on with the plot: she wakes up in the forest, surrounded by vampires, who take her off to a large lake house where they have a rival vampire, Constantine, chained to the wall. Sunshine is being provided as his dinner, as part of an attempt to torture/corrupt those Friendly Neighborhood Vampire tendencies out of him before killing him.

The rest of the book is concerned with the fallout from her kidnapping (including a Wound That Will Not Heal Without Vampiric Blood Magic, the intense interest of the Special Other Forces, and partially-faked PTSD), and also with the fact that the gang of vampires who kidnapped her is run by a master vampire, Beauregard, who does not take their escape well. Fortunately for Sunshine, Constantine comes back and helps her deal with the problems, and being a mage with an affinity for sunshine does make it easier to kill the bad vampires, as well as save the good ones...