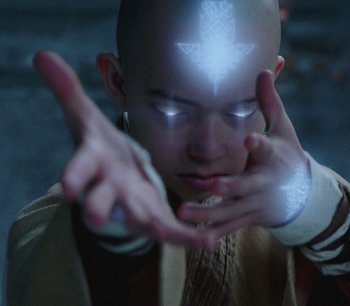 The Way of the Arrow.
Advertisement:

One of the many components of a Power Makeover, the Power Tattoo is a mark that shows a character has a certain set of powers. It may only appear when the time is right, or it may be visible at all times, but it frequently tends to glow. Expect it to be placed somewhere on the body that reflects its usage.

The more benign version of Mark of the Beast. If the powers were granted to them, may overlap with Claimed by the Supernatural.

Compare Marked Change, where the marks generally cover more of the body, but only when someone has powered up. See also Volcanic Veins and Tron Lines, which similarly glow. If the tattoo can move, it's also an Animated Tattoo.

It's also a Distinguishing Mark if it's, well, distinctive. If each mage has their own tattoo with their own design, then it counts. If all mages have the exact same symbol on the exact same place, not so much.