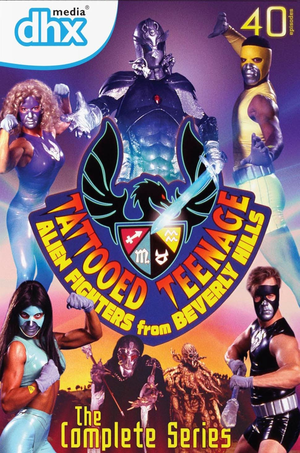 Tattooed Teenage Alien Fighters from Beverly Hills is a children's series produced by DiC Entertainment that ran for 40 episodes on the USA Network. Despite not being animated, it was part of USA's "Cartoon Express" block for a while, as noted in press releases

◊ from the time. TTAFFBH is one of several shows that were cranked out to get a piece of the pie when Power Rangers made it big. It is notable for being one of only two not adapted from a preexisting tokusatsu show.note The other being The Mystic Knights of Tir Na Nóg, which was made by the people behind Power Rangers.

Emperor Gorganus wants to take over Earth because it's the nexus of a network of portals that would make universal domination a lot easier for him. To stop Gorganus's monsters from taking over the planet, a blobby alien named Nimbar assembles four teenagers and gives them the power to transform into giant superheroes named after constellations to fight off the aliens. Whenever evil's afoot, the Galactic Sentinels' celestial tattoos flash to alert them.

The Galactic Sentinels are composed of: