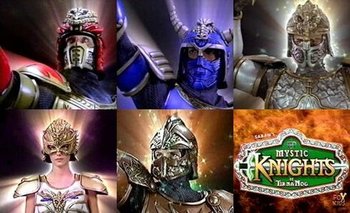 "Fire within me! Earth beneath me! Air above me! Water around me! Forest before me!"
Advertisement:

The best way to describe this sentai-esque series that aired in the '90s on Fox Kids is either Power Rangers meets Celtic Mythology or Star Wars in a Medieval European Fantasy where Darth Vader is a woman. Whatever the match it was Saban's attempt to create a PR series without worrying about Japanese stock footage. All of it, from the costumes to the monsters, was created from the ground up.

An island resembling medieval Ireland was divided into two kingdoms: Kells, ruled by King Conchobar (Stephen Brennan); and Temra, ruled by Queen Maeve (Charlotte Bradley). Maeve, who believed she was entitled to rule the entire island, made a deal in the first episode with Midar (Ned Dennehy), a dark fairy who speaks in the third-person: she would help him take over the fairy kingdom of Tir Na Nog in exchange for a green crystal whose sorcery would help her conquer Kells.

What had once been a stalemate between Maeve's Mooks and Conchobar's red-clad soldiers now tipped in Maeve's favor. Backed into a corner, Conchobar, at the advice of his court druid, Cathbad (Barry Cassin), sent Cathbad's apprentice, Rohan (Lochlann Ó Mearáin), and Rohan's best friend, Angus (Vincent Walsh), to find the legendary warrior, Draganta, who was supposed "to bring peace to Kells for a hundred lifetimes." After meeting up with Ivar (Justin Pierre), a prince from a distant kingdom pursuing a thief, and realizing Deirdre (Lisa Dwan), Conchobar's daughter, followed them, the four stumbled into the kingdom of Tir Na Nog. After a quick few episodes of secret tests, the four were judged worthy of inheriting the Mystic Weapons and Armor and becoming the Mystic Knights.

After a week of defeating the Threshold Guardians who guarded their armor, taming Pyre the Dragon of Dare, and learning Rohan was actually the warrior Draganta, the Mystic Knights settled into their routine: Maeve conjures up a Monster of the Week. The knights fight it with just their weapons. When that doesn't work, they transform into their armor and destroy the monster with their weapons. They return to the castle to chase out the Temra soldiers Maeve sent in while they were busy.

The first (and only) season ended with a Story Arc where Maeve demanded something she had apparently been waiting for from a witch, Nemain: a powerful half demon warrior named Lugad, whom the Mystic Knights could not defeat. The Warrior Of Temra Arc involved a power up for Rohan called Battle Fury, Garrett's return, the introduction of two not-so-Humongous Mecha, and a completely unanticipated Reveal regarding Lugad, Maeve, and Rohan. Maeve was defeated once and for all and exiled, and it seemed that all would live Happily Ever After. The last minute of footage, however, featured Midar and Nemain teaming up, making unpleasant plans for Kells and Tir Na Nog. Too bad the show was canceled, and they would never get to carry them out...