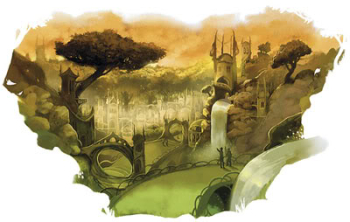 Faerie is a perilous land, and in it are pitfalls for the unwary and dungeons for the overbold... The realm of fairy-story is wide and deep and high and filled with many things: all manner of beasts and birds are found there; shoreless seas and stars uncounted; beauty that is an enchantment, and an ever-present peril; both joy and sorrow as sharp as swords. In that realm a man may, perhaps, count himself fortunate to have wandered, but its very richness and strangeness tie the tongue of a traveller who would report them. And while he is there it is dangerous for him to ask too many questions, lest the gates should be shut and the keys be lost.
— J. R. R. Tolkien, "On Fairy-Stories"
Advertisement:

Faerie, also known as Fairyland or Elfland, is a very specific version of Magical Land. Though Faerie is almost always a Magical Land, not all Magical Lands are examples of the Land Of Faerie.

The Land of Faerie must have at least two of the following qualities: