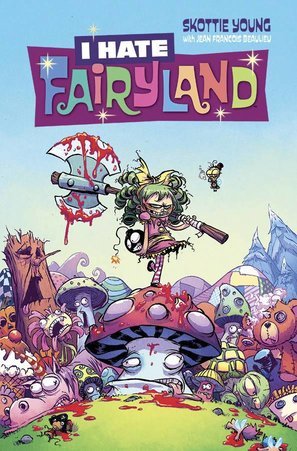 Our heroine with her minion and only a handful of her victims.
Advertisement:

I Hate Fairyland is a Fantasy Comic Book series written and drawn by Skottie Young (best known for his variant covers for Marvel Comics, adaptations of the first six Land of Oz books, and his Rocket Raccoon ongoing series) and published by Image Comics that's started October of 2015.

Once Upon a Time, there was a little six-year-old girl named Gertrude, who wished to be whisked away to a world of magic and joy. After finding herself in the aptly-named Fairyland, Gertrude wants nothing more than to find the Key that can get her home.

Well, brace yourself, because the truth of the matter is that Gertrude had been on her journey for 27 whole years. And while she looks like she hasn't aged in the slightest, her mind has been aging from the get-go. And the older her mind has gotten, the thinner her patience has become. Getting sick and tired of not getting any results as fast as she would like, she decides to beat the living fluff out of everything and everyone until she finds someone or something that can get her the hell out of Fairyland.

And all of Fairyland will feel her wrath.

Ran for three years and 20 issues with the main story closing up shop in 2018. In December 2021, Skottie Young announced that the series would be revived as a new ongoing series in Fall 2022. He also announced that he would be posting a series of short anthology comics by other creatives called The Unbelievable, Unfortunately Mostly Unreadable and Nearly Unpublishable Untold Tales of I Hate Fairyland to his personal Substack newsletter to be collected and printed at a later date.