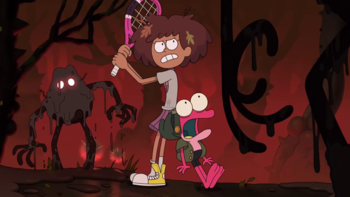 Maybe the monsters are up to settle this with a game of tennis?
"You must cut down the mightiest tree in the forest wiiiiith... a herring!"
— The Knights Who Say Ni, Monty Python and the Holy Grail
Advertisement:

So, you're a hero of destiny, summoned before the mighty king of this pastiche Tolkienesque fantasy kingdom and charged with saving the world from the terrible evil that has befallen it before it's The End of the World as We Know It. We know you can pull it off. Because Destiny Says So.

Oh, did we mention that you've got five bucks and a butter knife to your name?

Strange though it may seem, the king has sent you on the most important quest the world has ever known, and he expects you to pay your own way. Oh, he might invite you to scrounge around the castle for any treasure chests you can get to (forget the ones with locks or behind locked doors), all probably containing enough loot to buy a pointy stick; but it wouldn't even occur to him that, what with the world hanging in the balance, it might be a good idea to give you every resource at his disposal. No Supernatural Aid for you!

Nor are you bringing much to the situation; Warriors of Destiny don't have trust funds. Or savings accounts. Or bus fare, for that matter. You'd think that just to qualify as a Warrior of Anything, you'd at least have a sword, maybe a suit of well-worn armor from all that warrioring you did to build up your reputation, but no. In fact, you're a Level 1 warrior, so you don't even have any experience to speak of — though the king is hardly going to suggest sending you off to boot camp with his personal guard for a week.

No, you're just going to have to do it the hard way, beating up local slime and mad wolves for the gold pieces they drop. (What the wolves are doing with gold pieces to begin with is anyone's guess.)

Fairly standard setup for the classic fantasy Role-Playing Game and all sorts of Adventure Games.

Somewhat less prevalent these days, but not because the average starting kit has improved. Rather, the setup of being deliberately sent on a mission by someone powerful is currently out of fashion, in favor of either being a random person who got into the adventure through chance, or a self-motivated type who takes on the challenge without any initial support.

Survival Horror has a form of this trope, but there it tends to work a little better, as it's less about deliberately being shafted and more about not getting a chance to prepare.

Frequently overlaps with No Hero Discount. Contrast with Bag of Spilling, in which equipment/power-ups don't carry over to the next part; and Giving the Sword to a Noob, where a powerful weapon ends up in the hands of an incompetent such as The Chosen Zero. An alternative to this trope is It May Help You on Your Quest, where useless looking equipment turns out to be unexpectedly vital later on. If it's literally a herring, see Shamu Fu.

Often the first step in a Sorting Algorithm of Weapon Effectiveness. A Taste of Power subverts this trope... at first. For the gameplay version, see Early Game Hell. For the general trope of starting with weak gear, see Starter Equipment.

No relation to Red Herring, nor to the With This Ring trope. The fanfiction With This Ring is rather the opposite, starting the protagonist out with one of the greatest weapons in the universe. May overlap with Impossible Task (as the Trope Namer does).

Alternative Title(s): With A Herring